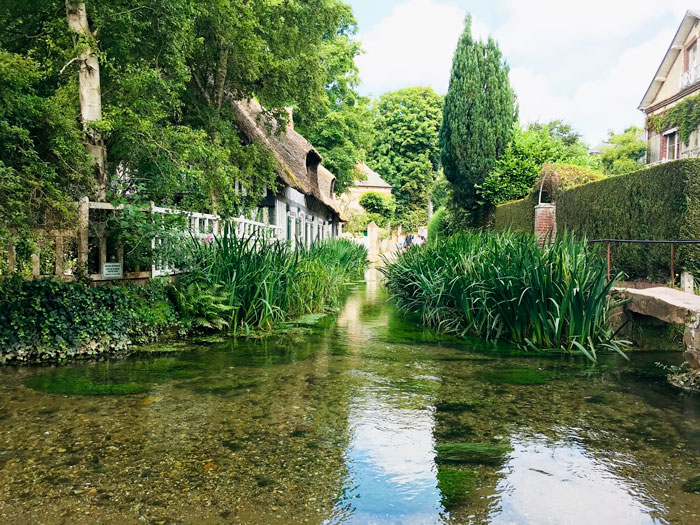 Still undecided where to spend the summer holidays in France? You don’t really have to go far to discover marvelous places near Paris. The cities and villages along the Côte d’Albatre (Alabaster Coast) in Normandy, that is part of the French coastline of La Manche or the English Channel, are must-be-visited places at least once in your lifetime.
The cliff-lined coast is rich in history and its beauty has enticed several legendary painters, writers and musicians the likes of Claude Monet, Geroges Braque, Camille Pissaro, Victor Hugo, Virginia Woolf, Erik Satie and a lot more.
I will start with Dieppe since I had the opportunity to know the city very well and it is accessible by train and by Flixbus.  Two hours from Paris and you will be at the pebble beach of Dieppe which extends over a length of 1.6 km. It is the closest beach from Paris and the oldest of the French seaside resorts. It was the Duchess de Berry who started the beach mania in France in the 1820s. Parisians flocked to Dieppe later when the railway was constructed.
***I have just learned that going to the beach wasn’t a fad before. Being born in an archipelago in the tropics, I never had the idea that there’s someone who started the idea of sea bathing. For me, sea bathing is as natural as breathing. But that’s how it went and it’s good to know.***
Beside Dieppe is the village of Pourville, which is around one hour walk. During low-tide, you can go this village by the beach which would take less time. In my case, it took me almost 2 hours since the landscape amused me a lot. You would see remnants of World War II like this Nazi’s blockhouse, eroded to beach and revealed during low-tide. But prudence must be taken like not going too close to the cliffs and start walking when the low-tide has just begun. High water would reach around 9 meters and it’s quick.

Next stop, Varengeville. It is known as the village of the artists. Here, you would see beautiful houses nestling in the hills. The park and garden of Le Bois des Moutiers are a must too.  If you want a beach which is quite “sauvage” and hidden, you can find it in Varengeville.

Then you could stop for few hours in Sainte-Marguerite-sur-mer, Quiberville or Saint-Aubin-sur-Mer to have another view of “La Manche” and the cliffs.
And you will arrive in Veules-les-roses which is less than an hour by bus from Dieppe and 25 minutes by car. It is awarded as one of the “Plus beaux villages de France” or the most beautiful villages of France. Veules-les-roses will not be Veules-les-roses without the Veules, the smallest river in France, and the village’s roses. You could find also trout fish or “truite” in the river, species which need fresh clean water to live. 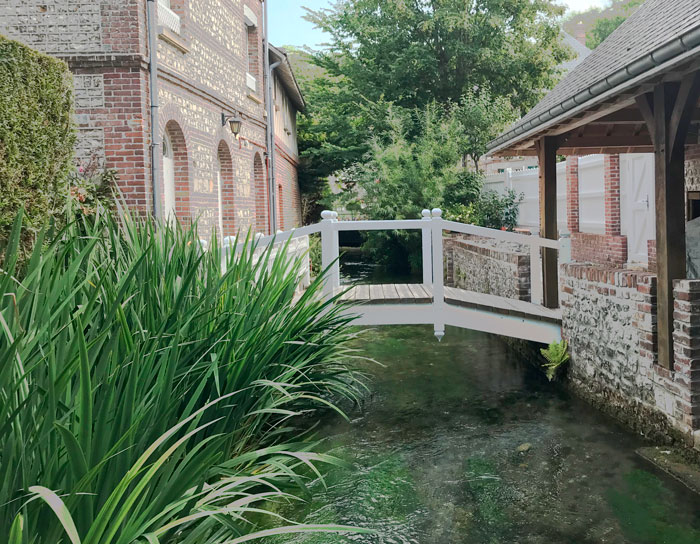 The last stop of the bus (line 61) I took was Saint-Valery-en-Caux. From here, you can have another perspective because you would see a lengthy stretch of white cliffs in the Pays-de-Caux.

On the other side of Dieppe, Le Tréport is only 40 minutes by bus. You can take the funicular (for free) up to the top of the cliff and have a good view of the landscape.  The scenery at Arques-la-Bataille should be on the list too.

For carless people like me, going to “insolite” places outside Paris could be complicated because in France there are villages where there are no buses during certain days. The buses are intended for the students and the workers, hence, the trips are less or none at all during weekends and holidays.
The good thing about the Alabaster Coast is that they increase the number of bus trips during summer. And it isn’t costly.
My tips for the carless:
You can go to Dieppe, find a bed-and-breakfast and make it your homebase during your sojourn in the Haute Normandie. To go there you can either take the train at the Gare St Lazare or Flixbus.
When you are in Dieppe, you can take the bus to visit Le Tréport, Veules-les-roses, St. Marguerite, Varengeville. The bus ticket  to go to these villages and cities costs 2€.
Budget:
SNCF to Dieppe: 22-32€ one way
Flixbus: 8.99-25€  one way
Airbnb: As low as 35€/night, search in Le Pollet district. Or if you want to stay in a classy Anglo-Norman abode, LaVilla Castel-Dieppe would be perfect for you.
Bus going to Le Tréport (line 68) and St-Valery-en-Caux (line 61): 2€/one way
Food:
I’m including the seafoods because they are exceptional.
Moules-frites: As low as 11€.
Plaice (Carrelets): As low as 3€/kilo
Whelks (bulots): As 4€/kilo -Saturday market day
Scallops (coquilles de St Jacques) : 4€/kilo -Oct-2nd week of May

Et voila! It’s your turn to discover the Haute Normandie.

Bars and Resto Food Reviews Where to go

Bohol Bee Farm: Filipino Products That Can Make You Proud

Plaid Skirt and Crop Top for this Canicule