Skip to Content
Home / Opinion / Why You Should Wear Band Shirts

I have seen a lot of girls wearing a band shirt of their favorite rock group. One time I was picking up the kid I’m babysitting at the nursery and the teacher had a nose piercing and an AC/DC t-shirt. I was surprised when I saw it because it’s kind of new to me. You can’t go to your office like that in the Philippines unless you work in I-don’t-know-where, maybe you’re a star, a fine arts school professor, a genius computer programmer or you own the company.

Me, myself and I love wearing band t-shirts too and as usual, I search for the rationale. And here they are:
To express your love for music
Music is your life and you want to tell the world about it but you just can’t scream it in the streets without looking like nuts. The solution? Grab a shirt of your favorite band. This way, you can flash not just your love for music but also the genre of music you are listening to.
It can make you feel freer
Well, the style is “détendu” so you do not have to worry about finesse. It is like you can be excused for sitting with legs completely stretched forward in public places (which I do in the metro by the way, sometimes). You can always do so whatever you may be wearing but certain clothes need some proper etiquette. With band shirts, you can walk or move the way you want without constraints.
Could kill and fill dead air
If you were born an extrovert, it’s easy for you to blah-blah with someone you do not know much. For introverts like me, there would be a great debate inside our brain whether the question is intrusive or awkward before an unintelligible phrase comes out of our mouth.
My Soundgarden shirt has saved me a lot of times like when I was waiting for our French teacher, a girl from Hungary arrived. After we talked about the weather there were a few moments of dead air until she told me that she likes my shirt and she’s a fan of the band too. We ended up talking about their music and the sad thing that happened to Chris Cornell even during the class. 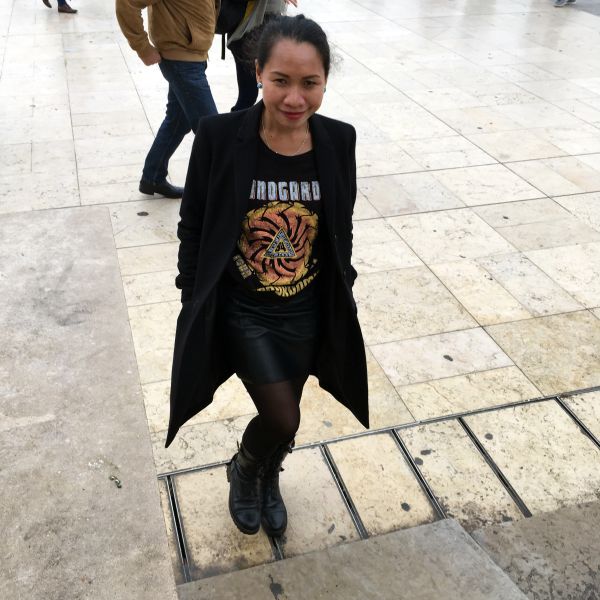 A conversation starter
The saying “Birds of the same feather flock together” is always applicable. If you are a fan of, say Weezer, and you are stuck in a room with someone wearing a shirt with the band’s name printed on it, the probability that you talk to this person is quite high. It is an obvious common interest and you can skip the small talk, which I’m so bad at, and go directly to the real stuff. You will get instantly close.
Sense of Belongingness to this small community
Again, when you see someone wearing a t-shirt of your favorite band, you would surely think that you belong to this community. I saw a girl in the metro with a Velvet Underground bag, it’s not a t-shirt though. She caught me staring at her bag and we exchanged smiles. Before I descended, I felt it was just right to say “nice bag you have” but without the Yoda accent.
Another example, I was picking up another kid (the brother) at school, it’s the primary school this time, and I was wearing my Pink Floyd shirt. This teacher looked at my shirt and smiled. The next day she was wearing a Rolling Stones shirt. We had some kind of mutual agreement and she has been nice to me since.
There are some who would say it is quite pathetic but it is really up to you if you handle it pathetically. I love the band and I want people who don’t know them discover their music too.
However, there is still an important rule when you wear a band shirt which is just fair and logical. You must really know the band and their albums and songs. If you know nothing about them, it is like going to a protest rally without knowing what the cause is. But still, you’re free to wear what you want.

Life and the Seasons

Some Gift Ideas for Kids this Christmas

Is this a Farewell Snow?