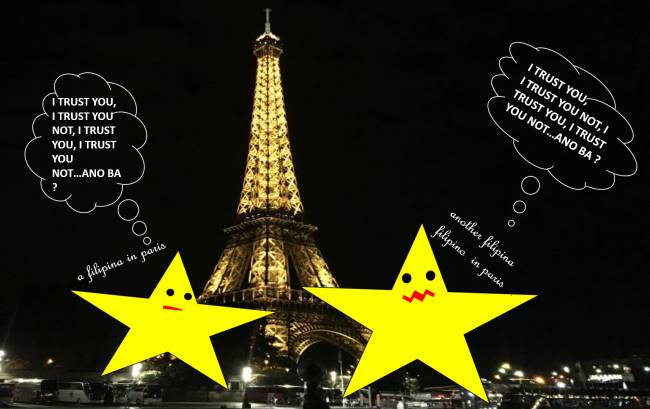 When I arrived here in France with the purpose of staying for good, my ears would grow for about 5 inches if I heard someone speaking tagalog or bisaya or any language/dialect that sounds like Filipino. I would always find an opportunity to attract their attention so I could talk to them because we’re so far from Philippines and we’re just few here and here we are, speaking tagalog in a sea of French-speaking dudes. It’s just so cool and amazing.
One time, I was beside two Filipinas in the metro. I’ve had few glasses of wine so I had the courage to strike a conversation with them. It went well, with the normal questions like where in the Philippines am I from, how long have I been here…things like that. Then before they got out of the metro she gave me an advice to be careful in dealing with other Filipinos and to never trust immediately. Well, everybody knows that we should not trust anyone right away but I was still disappointed about it. I was bothered because from the sound of it, the problem of scamming or betrayal amongst us is that grave. It made my smile disappeared for a moment because meeting fellow Filipinos can really spike up my morale then that was what I’ve found out.

Then, another time, while I was on the way to a training given by Speaking-Agency for their language ambassadors, I passed by a man cleaning a building and he asked me if I’m a Filipina. In my mind I was like, oh maybe he will take advantage of me. But the logical part of my brain told me to calm down, “He cannot grab you or kidnap you. We are in public. And you’re not bringing some money and because you do not have money anyway.” The smiling me kept on smiling but with the word “CAUTION” in uppercase already registered in my head. When I said goodbye, he told me not to trust other Filipinos and there was another “Be Careful”. I started telling a joke but cut it immediately because that would not have been nice since I was about to say “Oh, don’t worry, two Filipinas have told me to be careful of Filipinos like you.” And, maybe he’s got the same thing in mind about me.

In one of the formations given by OFII, there were two Filipinas also. They were nice and funny so I hooked up with them. I would normally ask for telephone numbers because WE ARE FILIPINOS and I feel like we are brothers and sisters but, I stopped doing it because they might be thinking that I’ll be exploiting them or something. I watched them as they entered the metro station and I missed them because I like them. But of course, they didn’t leave me without giving an advice. “BE CAREFUL of other Filipinos…!” I kept the reply in my head which was “Don’t worry, I was warned several times to be careful of other FIlipinos and that would include you.” And I am not exaggerating that is why it’s sadder. I haven’t been conned yet though. Like in buying things I do apply caveat emptor.
The thing is, everyone I met was nice and I felt guilty for being paranoiac. It’s just weird. The “Japanese Collaborator” days are over. We’re not in World War II anymore. We are friends with Japan and Spain.  Yet, we still cannot trust each other. We cannot trust each other because we break each other’s trust that is why we cannot trust each other.
So what are we going to do? Time to cut the crap. We should sing again that popular song in my elementary years which goes this way, “For together we stand, divided we fall, together we climb to the top of the world, we can be what we want, for the world to see, that we are the children of yesterday’s dream!”…Didn’t check google lyrics. J

An Ordinary Week in Paris